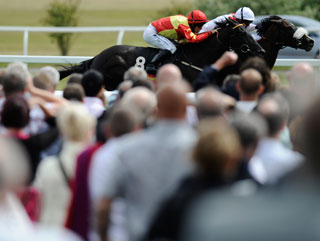 "Trachonitis doesn’t always find quite as much as you would expect and with seven odds-on trades in defeat you can obtain a useful winning position on the rest of the field."

With in-running trades the temptation is to concentrate on those horses dictating the pace from the front, or being ridden in a prominent manner. But some of the best plays come from those animals that are held up in mid-division, or even further back, but travel with supreme style. This allows you to obtain a clear position on them even before they have started to make their move and then you don't have to worry if they are delivered too late or they don't find as much as expected. Here are some such 'closers' as the Americans would call them.

Trachonitis
John Jenkins' experienced 7yo gelding loves a test of stamina and has five career wins to his name, three on turf and two on the All-Weather. The preferred tactics of Trachonitis since joining Jenkins has been to hold him off the pace and let him travel past tired horses to win the race. But, in all honesty, he doesn't always find quite as much as you would expect and with seven odds-on trades in defeat you can obtain a useful winning position on the rest of the field. His best form on turf has come when the ground is good to firm so beware he could go on to win under those conditions. Otherwise take him on at low odds.

Cai Shen
Richard Hannon's son of Iffraaj has only had six starts in his career but one very noticeable point about him is how well he travels. With three wins in those starts Cai Shen knows how to get his head in front but as he is set harder challenges it is nice to know that you can lay out your position on him during a race before he is even asked the question. In his last two defeats he has traded at [2.5] and [1.51] in the run before finishing second and third. He relishes good to firm ground and will win further races but he is a great trade with the eye catching way he travels.

Rocket Rob
I have to mention a sprinter somewhere and Willie Musson now trains a 5yo who likes to be delivered as late as possible. This leads to many in-running factors with Rocket Rob, who had previously been with Marco Botti, but new connections are persevering with the same tactics. So, as a hold-up sprinter, he quite often hits trouble in-running and it appears that they don't want him at the front to early. His best record is on good to firm ground and he appears to enjoy Sandown. The play on him is that, if you think it is his day back him in-running because he nearly always trades bigger, and if you don't lay him in-running as he travels into the race.