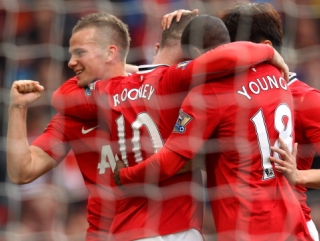 Tom Cleverley celebrates the fact that we can't think of a lookalike for him.

Dan Fitch lifts the lid on the doppelgangers who could pass for Manchester United's stars, if only they could play football.

There are a lot of big questions on the minds of Manchester United supporters at the moment. Will they retain the Premier League? Is this the year that they topple Barcelona in Europe? And perhaps most importantly, who gets a place in the 2011/12 Manchester United lookalike XI?

Luckily, we're on hand to answer one of those questions.

One hits balls over a net, the other keeps them out of one.

Right Back: Micah from Heroes AKA Rafael da Silva

PIcking Fabio would have been far too easy.

The star of Brooklyn's Finest is a dead ringer for one of Manchester's finest players.

You might have expected Goebbels to be playing on the right wing.

Centre Back: James McQuillan from The Apprentice AKA Nemanja Vidic

The one certainty is Nemanja Vidic's life is that one day Sir Alex will tell him, "You're fired."

Could Norma drive her truck through United's midfield when Anderson plays?

The Holby Blue star looks very much like this Red.

Proof that it would be a bad idea for Nani to have plastic surgery and lighten his skin.

Left Midfield: Marlo Stanfield from The Wire AKA Ashley Young

Two men who are responsible for feeding deadly hitmen.

Both are capable of a moment of magic.

We're not sure that Sir Alex would tolerate Mars' lazy attitude.

Kuszczak has made the odd embarrassing gaffe, but he can't compete with Boris.

Chris Smalling has certainly been schooled in the art of defending at Old Trafford.

Only love can tear our team apart.

One of these lookalikes got much better with age. The other didn't.

Jermaine could be a vital part of a Jackson Five-man midfield.

We could have picked Mark Strong or The Count from Sesame Street, but we thought Dimi would cry if we didn't opt for his hero Andy Garcia.

One scores on Twitter, the other scores from the bench.

These gruff, Scottish types all look the same to us.