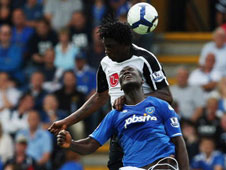 Portsmouth are now into [1.9] to be relegated from the [4.9] they were on the opening day of the season.

"The omens, then, are good for Wolves, Birmingham and Burnley, and especially for the latter pair. Promoted teams that not only won in their opening three games, but got at least one other point (as Burnley and Birmingham have done), have stayed up 12 times out of 17."

Andrew Atherley crunches the numbers to find the value in the Premier League relegation market where teams such as Wolves and Burnley who have a win under their belt may be worth siding with to beat the drop.

Jumping to conclusions about Premier League teams before the end of August can be risky, but not when it comes to the relegation battle. History tells us that the first three games of the season are often a pretty accurate guide to which teams will stay up and which might be heading for the drop.

Many punters have already voted with their money on Betfair, where market opinion on the Premier League relegation battle has shifted in the opening two weeks of the season. Burnley, [1.66] pre-season favourites in the Relegation 2009/10 market, are out to [2.08] third favourites after starting with two wins in three games. Fellow promoted teams Birmingham and Wolves who both got an early win on the board, are [2.44] and [3.25] respectively, having been [2.08] and [2.56] before a ball had been kicked.

That trio are the main drifters, while the most notable shortener has been troubled Portsmouth, down to [1.98] from a pre-season [4.9] after taking no points from their first three games. Hull, too, have shortened a little to [1.9] favourites from [2.08] despite winning at home to Bolton on Saturday, having lost their opening two games.

These market moves do have a solid foundation if we look back at Premier League history. First, let's consider the promoted teams: all three have secured at least one win in their opening three games - the first time that has happened in eight years (that season, all three promoted teams stayed up).

Since the Premier League season was reduced to 38 games, promoted teams have been more than twice as likely to survive if they win in their first three games - 17 stayed up, nine were relegated (the last such team to be relegated was Manchester City in 2000/01 - since then, 13 have survived). Contrast that with the figures for promoted teams that didn't win that quickly - 11 were relegated, only four survived.

The omens, then, are good for Wolves, Birmingham and Burnley, and especially for the latter pair. Promoted teams that not only won in their opening three games, but got at least one other point (as Burnley and Birmingham have done), have stayed up 12 times out of 17.

Teams that fail to win in the first three games, like Portsmouth, are more likely to go down. In six of the past eight seasons, at least two of the three relegated teams have been in this category - one relegated team fitted the bill in the other two of those eight seasons.

Of course, the odd good team (like Everton this season) is prone to a poor start, so it is sensible to exclude teams that finished in the top half of the table the previous season. In the past eight seasons, then, we find 28 teams that failed to win in the first three games - half of which were relegated.

Again, on that basis, backing Portsmouth at [1.98] in the Relegation 2009/10 market is a solid bet. And it will be worth keeping an eye on how Bolton and Blackburn, both without a point from two games played so far, fare in their third games. If they fail to win again, it will be worth looking to back them at [5.8] and [14.5] respectively.

With Bolton facing Liverpool on Saturday, it could be worth taking a chance by backing them now to be relegated, as they will be prime candidates if they lose to the Reds.
The Rock Bottom 2009/10 market is well worth a look too, as a team without a win in its first three games has finished bottom in six of the past eight seasons. Portsmouth are favourites at [3.8], while Bolton catch the eye at [18.0].

Blackburn down but not out

So, why not back Blackburn to be relegated? They will be tempting if they fail to register a first win against West Ham on Saturday, but Rovers were marked down by this columnist as a team with scope for improvement and it could be worth keeping them in that category, for a little longer at least.

That potential improvement stems from last season's better form after Sam Allardyce took charge in December. From there, Blackburn lost only three out of 17 games against teams from outside the big four and overall they accumulated points at a rate of 1.33 per game - over the course of a full season, that would give them 50-51 points and somewhere around tenth place.

In the same period, Portsmouth and Bolton averaged 0.86 and 1.00 points per game respectively, so this season's slow starts are merely a continuation of their long-term relegation-zone form.

With Blackburn, it might well be a different story, and they could be a team to follow against non-big four opponents, as long as they can get that vital first win on the board quickly. For now, they should be given the benefit of the doubt in the Relegation 2009/10 market.