Premier League Betting: Will Liverpool ever win another title? 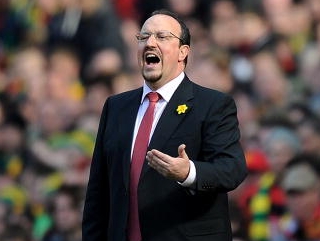 Come on! Who ordered this paella?

"Someone should tell Rafa Benitez that the three points for a win system was introduced in England back in 1981, because he plays as if a draw is something to shout about."

Dan 'The Betting Man Fitch' grew up in an era when Liverpool were synonymous with success, but he can envisage a future where they never win another league title. Rafa, Gerrard and Torres... it's over to you.

When I was a kid Liverpool used to win everything and it was they, rather than Manchester United, who were the number one choice for your discerning glory hunter. Then one day, without warning, they just stopped winning league championships.

Liverpool's last title came in 1990 and since then I've always assumed that it was only a matter of time until they reacquainted themselves with the trophy. But just a moment ago, I saw the top of a newspaper and realised that it is now the year 2010. The grey hairs round my temple should have been a giveaway, but, astonishingly, 20 years have passed since Liverpool last won the league and for the first time in my life, I'm questioning whether they will ever be able to win it again.

There are so many things wrong with Liverpool at the moment that it's difficult to know where to start, but I'll begin with their manager. Someone should tell Rafa Benitez that the three points for a win system was introduced in England back in 1981, because he plays as if a draw is something to shout about.

Liverpool will never win the league title with Benitez as boss, because they'll never win enough games. When it's 1-1 with five minutes to go at Old Trafford, Alex Ferguson has every attacking player on the pitch, searching for a winner. Over at Anfield, Rafa strokes his chin, considering whether he can afford to take off Dirk Kuyt for Yossi Benayoun, or if it's too much of a risk.

It looks as if Benitez will leave Liverpool in the summer. New investors would want someone like Jose Mourinho, while Benitez himself will not tolerate the current lack of funds on offer.

A more pressing concern should be whether they can hang on to their best players. Fernando Torres looks like he's had enough and cut a petulant figure in the game against United. It would take Champions League qualification and major investment for Liverpool to have any chance of keeping him.

Steven Gerrard must also be looking at his birth certificate and wondering whether he wants to stay at Liverpool, or win a league title before he retires. Gerrard will turn 30 in May.

Then there's the financial situation, with Liverpool's debts estimated to be around £237m. Unless new investors come on board there will be little money for transfers next season and if Liverpool don't finish fourth, selling Torres and Gerrard might be a necessity.

Liverpool are no nearer to moving to their new stadium, while rivals like Manchester United and Arsenal play before massive crowds. The longer they stay at Anfield, the more difficult it will be to compete financially.

So much hinges on Champions League qualification. That will keep the finances flowing and enable the club to retain/attract quality personnel. It's a tall order though, with Liverpool now [5.9] to finish in the top four, with Spurs at [2.96] and Manchester City at [2.4].

If Liverpool don't finish fourth, there's a very real chance that they could start next season attempting to rebuild a team with very little cash. The only positive is that at least Benitez won't be the one spending it.

Liverpool have reaped the rewards of a Premier League where money talks, but now they could be another of it's victims. A future where Liverpool are just another mid-table club (or worse) isn't inconceivable. That would be a tragedy, because Liverpool football club was once a symbol of all that was good about English football. The fans at Anfield deserve better.