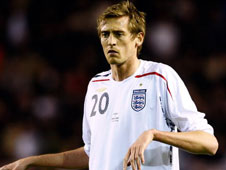 "I recall seeing Crouch play for Aston Villa and the word that best summed up his performance was 'limp'. He's certainly upped his game since, though. He's more aggressive, more confident, more clinical in front of goal and certainly deserves his place in the England squad."

Having started his career at Spurs, Peter Crouch is yet another former player to return to White Hart Lane under Harry Redknapp. With Darren Bent likely to move to Sunderland in the process, Nik Wardle wonders who end up better off.

Harry Redknapp's trend of buying former Spurs players has continued with the signing of Peter Crouch from Portsmouth. His signing sees the likely departure of a fellow England international, Darren Bent, to Sunderland. It could be argued that Redknapp's trading of England strikers could be the footballing equivalent of 'paper pushing' - but I think this striker merry-go-round could suit all parties.

I recall seeing Crouch play for Aston Villa and the word that best summed up his performance was 'limp'. He's certainly upped his game since, though. He's more aggressive, more confident, more clinical in front of goal and certainly deserves his place in the England squad.

He's no gamble for Spurs as he's proved himself in the Premier League and linked up well with Jermain Defoe at Portsmouth. Redknapp will have problems keeping all four of his star strikers happy, but as I suspect Redknapp isn't a huge admirer of Roman Pavlyuchenko (who may even leave himself), Crouch should get plenty of starts. Odds of [17.0] for Crouch to finish Top English Goalscorer are pretty reasonable, although I'd expect his club mate Defoe ([7.6]) to outscore him. I certainly wouldn't back Crouch at [75.0] for the overall Top Goalscorer.

With Crouch on board, Spurs should battle for a top six placing but with an early season defensive crisis, coupled with a tough start, I wouldn't back them at [2.88] to do so.

For the most part, Bent cut a tragic figure at Spurs. Most clubs would give their record signing (as he was then) every chance to succeed but even scoring a goal or two wouldn't guarantee Bent a start in the next match. The plain and simple truth of Bent's career at Tottenham was that there were always better forwards than him at the club.

As he proved at Charlton, if he gets regular starts, he will score goals. On paper, his possible partnership with Kenwyne Jones looks a good one and Bent is a better outside bet than Crouch to finish as Top English Goalscorer at [15.5]. Let's not forget, he achieved this recognition at a Charlton side who on paper wee far poorer than Sunderland are likely to be this term.

For my money, Steve Bruce was a good choice to become Sunderland's new manager. With the likes of Bent and Frazier Campbell added to the squad, I think they'll be safe in mid-table this season.

With South Africa 2010 looming and England almost certain to qualify, Crouch and Bent are in direct competition for a place in the World Cup squad. I feel Bent is too one-footed to be a top class striker and given that the likes of Michael Owen (despite being out of Fabio Capello's plans at the moment) and Defoe are better finishers, I'd be surprised if Bent made the squad. Crouch, on the other hand, with 16 goals in 34 appearances (albeit many goals against weaker opposition) and his unique nuisance factor, is likely to be on the plane. I just hope they give him ample leg room.