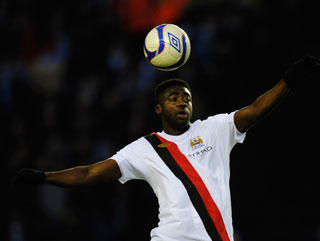 Toure-ing above his opponents. Kolo Toure is a key player for Manchester City

"The arrival of Edin Dzeko means Mancini may have to change his strategy to accommodate the Bosnian striker, and City have been much more exciting when they’ve played a system with two upfront."

There has been plenty of chopping and changing in terms of personnel and systems in the Manchester City camp so far this season. These changes create patterns and therefore betting opportunities, says master of tactics Michael Cox.

Few Premier League managers have had their starting line-up debated by fans as fervently as Roberto Mancini this season. The Manchester City manager has a large squad (including various multimillion signings) to choose from, and has faced frequent accusations that his style of football has been too negative. How does his mentality and team selection transfer to betting? Here are five stat-based conclusions about City's season so far.

City tend to win fewer corners when David Silva plays. The Spaniard has made a good impact in his first season in the Premier League, becoming a fan favourite with his quick, short passing. Although used in theory as a wide midfielder, Silva spends practically all his time in the centre of the pitch, trying to find space between the lines to create. On the other hand, some of City's other wide players - Adam Johnson, James Milner and Shaun Wright-Phillips, for example, tend to stay on the flank more, even if used on the opposite side to their stronger foot, as frequently happens with Johnson. All of this means that City win, on average, 8.3 corners per match when Silva does not start, compared to 6.0 when he does. Consider this when looking at the corners odds markets and the corners match bet market.

Vincent Kompany has been City's star man at the back this season, being ever-present and widely acknowledged to be the main reason for City's excellent defensive record so far this campaign. It is his partnership with Kolo Toure that has worked well, however, and the ex-Arsenal man should be given more credit for his contribution, because City have looked weaker when the Ivorian has been absent. Of the 20 goals they have conceded in 24 league games, eight of them have come whilst Toure has not been on the pitch, having either not started or gone off injured midway through a contest. In all, he's missed 26% the total minutes City have played, and in that time they have conceded 40% of their goals. Keep an eye on the "no Man City clean sheet" selection when Toure isn't around.

Mancini has received criticism for using three 'defensive' midfielders this season - Nigel de Jong, Gareth Barry and Yaya Toure - although in some games Toure has played very close to Carlos Tevez, and in others Barry has played more as a left-sided midfielder than as a central player. Still, the stats make interesting reading for the under/over 2.5 goals market. When De Jong, Barry and Toure have started together, 41% of City's league games have featured more than 2.5 goals, whilst when they haven't, 57% of their league games have featured more than 2.5 goals.

The arrival of Edin Dzeko means Mancini may have to change his strategy to accommodate the Bosnian striker, and City have been much more exciting when they've played a system with two upfront. We're going on a relatively small sample size and we're making a distinction between a striker played as a striker, and a striker played as a wide player - for example, in last week's 1-0 defeat to Aston Villa, Tevez started wide left, and then Dzeko played there after the break - because only twice have City started with a formation containing two real strikers - the 3-2 win over Blackpool in October, and the 4-3 win over Wolves earlier this month. This means that Mancini has started with two out-and-out strikers just 8% of the time, but those games have been responsible for 19% of the goals City have scored, and 25% of the goals they have conceded.

You may think about siding with 'over 3.5' goals when Mancini goes with two up top.

City have been particularly impotent in front of goal against sides high up in the table. In the six games they've played against the other sides in the top six - once versus Manchester United, Chelsea, Tottenham and Sunderland, and twice versus Arsenal - they've scored just one goal, and recorded just 2.3 shots on target per game. On the other hand, they've kept clean sheets in four of those games, with three of the four goals coming against Arsenal after City were down to ten men. Five of the six games have featured under 2.5 goals.