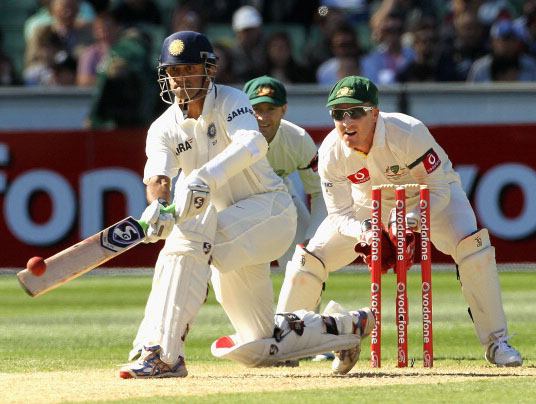 Eyes on the ball. Rahul Dravid sweeps during his last-ever Test series against Australia.

"You also know a Test batsman is a bit special when in a game that relies so heavily on resolute defence, patience, stamina and concentration you get nicknamed “The Wall”. "

One of the greatest batsmen of all time has played his last-ever Test match and we won't be seeing Rahul Dravid in the international arena again. The game of cricket is all the poorer for it.

Rahul Dravid is set to announce his retirement from Test cricket after a career in the longest-format that spanned 15 years. You know you're talking about an exceptional player when you're the second-highest Test run scorer of all time in the longest format (behind only Sachin Tendulkar) with over 13,000 runs scored at an average of 52.31. You also know a Test batsman is a bit special when in a game that relies so heavily on resolute defence, patience, stamina and concentration you get nicknamed "The Wall".

Dravid wasn't just a talent in the five-day game. He also scored over 10,000 runs in ODIs, though sadly his retirement from the 50-over game came before India finally managed to win the World Cup since he began his international career. Victory over Sri Lanka in the final was secured after a match-winning knock from skipper MS Dhoni in April 2011.

And if Dravid wil best be remembered for the sheer weight of runs he contributed to his country, we shouldn't forget that that he was also one of the greatest catchers to ever occupy the slip cordon and that he often also donned the wicket-keepers' gloves, particularly in limited-overs matches. And to cap it all off, 'The Wall' epitomised everything that was right about the game of cricket: honesty, integrity, fairplay, decency. He also had a spell as captain of the national side.

His retirement comes in the wake of a certain criticism that the older members of India's Test batting line-up prolonged their careers just a little too long. Gautam Gambhir, VVS Laxman, Virender Sehwag and Tendulkar are all also the wrong side of thirty and whereas they haven't lost any of their class or ability with the bat, their running between the wickets slowed down over the years and their athleticism in the field isn't what it once was. It was typical of Dravid to call time on his own career before he outstayed his welcome.

He will continue playing in the shortest format of the game - T20 - when the Indian Premier League resumes on the April 4 for at least one more season ; he's still contracted to the winners of the first-ever edition, the Rajasthan Royals.

But he certainly won't be turning up for India in the 50-over format at the Asia Cup, which begins on March 11 and where India are [2.56 ] to be crowned champions. But Tendulkar will be there, as he carries on his pursuit of his 100th international century. If he does get it, his own retirement may not be too far away.