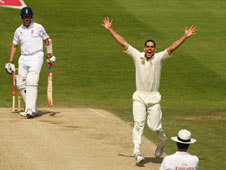 Will it be more joy for Australia at The Oval? They currently trade at [2.36] for the series win.

England lose advantage following innings defeat at Headingley as dominant tourists pull themselves back into series.

England find themselves in the customary position of Ashes underdogs following a comprehensive innings defeat in the fourth Test today.

Two consecutive middle order failures condemned Andrew Strauss' men to the loss which leaves the series level at 1-1 with one Test to play.

And Australia's crushing superiority at Headingley leaves them favourites to earn a win at The Oval.

That would seal a remarkable come-from-behind series victory for the Aussies who have been matched at a high of [9.5] on Betfair following defeat at Lord's.