Other sports > Formula One > Japanese GP Betting: Only front three can be trusted on high-speed battleground that is Suzuka

Japanese GP Betting: Only front three can be trusted on high-speed battleground that is Suzuka 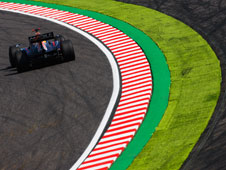 "The high-speed, figure eight circuit plays right into the hands of Red Bull which explains Sebastian Vettel on pole. He was fastest in every stage of qualifying and has a 'healthy' fuel load according to team principal Christian Horner."

The return to Suzuka was too eventful for several drivers with four cars ending up a mangled mess during Saturday's practice and qualifying sessions. Three red flags in qualifying made it a stop-start affair but once cars were on the track it was probably a little easier as there was less traffic to deal with and little chance of being blocked on a hot lap.

This is the first time that the F1 circus has appeared at Suzuka since 2006, one of the more favoured tracks by drivers, not just because of its high-speed corners but also because it was a staple circuit on the driving video games of the nineties.

The high-speed, figure eight circuit plays right into the hands of Red Bull which explains Sebastian Vettel on pole. He was fastest in every stage of qualifying and has a 'healthy' fuel load according to team principal Christian Horner.

Off the grid though, Vettel will have competition. The starting straight is quite long and Lewis Hamilton sits directly behind him in P3, with his finger poised on the KERS button. The McLaren will have the advantage under brakes, but the consistent speed of the Red Bull is more likely to prevail over the course of the race. Vettel should win the race, but at odds-on I'm not keen.

At the time of writing, this race had turned into a bit of a schemozzle - four drivers (Button, Barrichello, Alonso and Sutil) have been penalised five grid places for speeding through yellow flags, Sebastien Buemi has been given the same penalty for driving a dangerous car after crashing, Timo Glock reverts to the rear of the grid after a chassis change and it's rumoured that Heikki Kovalainen will take a five-spot penalty as well for a gearbox change - but the latter one is unconfirmed by the FIA at this stage. Which makes having a bet on anyone other than the front three drivers complete guesswork until the revised grid is finalised! I was keen to back Adrian Sutil for a podium but that now appears unlikely.

Nico Rosberg and Robert Kubica have the biggest fuel loads of any in the top ten, if [1.75] was available for either I'd be happy to back them both for a points finish. Jenson Button will start just outside the top 10 with a Toro Rosso ahead of him, and cars on heavier fuel loads odds-against for a points finish looks a bet to me.

The last two races at Suzuka saw plenty of overtaking action with Fernando Alonso winning from fifth in 2006 and Raikkonen amazingly from 17th on a dry day in 2005. The three previous races were dominated by Ferrari who won from pole each time. This circuit has a relatively high attrition rate - only 11 of 20 cars finished in 2002 and at least four cars have failed to finish in each of the last five years - a message which was reinforced in qualifying.

High speed, plenty of overtaking opportunities and high attrition means the leaders could be well spaced, so over 10 seconds for the winning margin looks attractive.

Back Jenson Button for a points finish at [2.0] or better
Back Winning Margin over 10sec at [2.3] or better