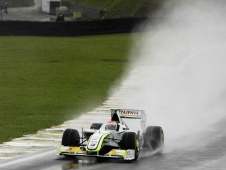 "At the prices availbable, and with rain in the air, I'm taking on Barrichello and Webber."

A Brawn is in pole but it's not the one British F1 fans wanted. Meanwhile, tropical weather conditions could play havoc on a track famous for retirements, says Scott Ferguson.

A wet qualifying session threatened to make a mockery of the fight for the Drivers' Championship with big names amongst the early casualties.

For a while it looked like Nico Rosberg would take pole with drivers reluctant to go back out on the track in the dreadful conditions, but eventually the rain clouds cleared long enough to place a Brawn ahead of a Red Bull on the front row.

But it's Rubens Barrichello and Mark Webber with the headstart, rather than Jenson Button and Sebastien Vettel who start way back in 14th and 15th. Further back in the pack are the McLarens of Heikki Kovalainen and Lewis Hamilton, who interestingly have some of the lightest fuel loads in the back half of the grid. Expect aggressive driving from them early on.

The tropical weather is likely to continue into the race with showers expected. And there are few more difficult courses in wet weather than Interlagos. The undulating left-handed track has a lot of camber which switches the water trails across the road surface at inopportune places, and the altitude difference between the highest and lowest points of the circuit mean that some areas of the track can be in the middle of a shower while others are dry.

This track can have a lot of retirements - only 14 of 22 starters finished in 2007, while only two failed to be classified last year, had the rain arrived earlier than with 10 minutes to go, there could have been a lot more carnage.

The strongest drivers here in recent years have been Felipe Massa (absent), Kimi Raikkonen (driving a car without any upgrades for months) and Fernando Alonso (starting 10th, just one podium all year). So from that, you'd give a big advantage to the guys on the front row, particularly since the last five Brazilian GPs have been won by grid positions one to three.

Yet the records of Barrichello and Webber in Brazil are nothing short of terrible. Even in Rubinho's spell at Ferrari, he couldn't do any better than a single podium here, despite two starts on pole. The Australian's ninth place last year was his first finish here since his Minardi debut back in 2002.

It could be time for a change of luck, but at the prices and with rain in the air, I'd rather be taking them on.

In other markets, the most recent occasions this race has been close (margin under five seconds) has been when one team has run 1-2. That's highly unlikely this weekend with Button and Vettel way down the back. Expect a winning margin over 10 seconds.