Other sports > Formula One > Abu Dhabi F1 Betting Preview: A track made for Hamilton

Abu Dhabi F1 Betting Preview: A track made for Hamilton 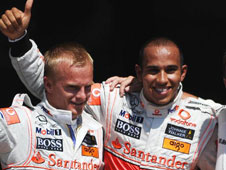 This is a track that suits Lewis Hamilton's driving style as his pole position start demonstrates and he goes into the race as a very short favourite.

"The Sultan of Stevenage bided his time well until the last valid lap of Q3, and streeted the field by two-thirds of a second. To make matters worse for his rivals, he isn't even light on fuel."

We all know who's World Champion but there's plenty of other stuff up for grabs such as second spot in the Championship and rides for next year. Then there's the small matter of a race to win with Lewis Hamilton the hot favourite to clinch it, says Scott Ferguson.

The season concludes rather tamely with little on the line this weekend in Abu Dhabi, but the F1 circus is excited about the new state-of-the-art circuit (who wouldn't be when money in no object?) and the quality of the evening concerts (Beyonce, Jamiroquai, Kings of Leon and Aerosmith). Apart from the wow factor of the new circuit, the press coverage has mostly been about driver movements for next season. There are quite a few drivers without confirmed, or at least announced, seats for next season so the motivation for some is higher than others.

The track itself varies between long straights ideal for the KERS cars, in that feature's last showing for at least a year, and tight turns with no run-off error amongst the concrete jungle. It is a unique circuit and totally flat, with only the tunnel underneath the circuit on the pit exit moving the bubble on the spirit level. Without even looking at the times, this layout appears ideal for Hamilton. Long straights to gain the full advantage of KERS, tight Monaco-like turns and a fresh circuit for everyone, a challenge which Hamilton has said he relishes. The Sultan of Stevenage bided his time well until the last valid lap of Q3, and streeted the field by two-thirds of a second. To make matters worse for his rivals, he isn't even light on fuel. There isn't a lot between the top 10 at all in race weights.

The only battle left between drivers is the arm-wrestle for second in the Drivers' Championship between Vettel and Barrichello. Yes it's the fight for 'first loser' as Vettel has admitted, but it still looks good on your CV when trying to justify multi-million pound contracts.

To the race and a betting angle. Hamilton is one from three off the pole this season, but that one win was under the lights in Singapore. If ever there were track conditions to suit him, it's here, plus a nice lead on lap times and a chasing pack unlikely to be busting a gut to get by. [1.4] isn't a price for me but don't let me turn you off it if that's your price range.

I like two drivers to squeeze into the points at decent prices. Nick Heidfeld may be in his last F1 drive, he starts in a points position and has a good record of getting home. At [1.75] or better, he is worth a bet. Kamui Kobayashi will be keen to lock in a drive for next season merit rather than his passport, and has shown some talent. Around [3.5] is a good price for him.

On the other hand, Jarno Trulli has a record of retiring from good positions and you might be able to lay him at a silly price ([1.22] or less).

And for my final bet of the season, it's back to the winning margin market. I honestly think Hamilton can gap the field here, back over 10 seconds if you see [2.4] or better.