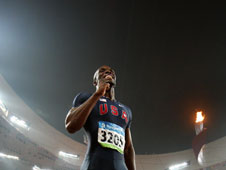 "Merritt won last year’s Olympic final by an unheard of margin of 1.1 secs from Warriner, with Neville literally diving over the line a split-second in arrears. I feel that the early-birds may have priced this up about right with Warriner a slightly generous [2.34] to obtain revenge over Merritt [1.56]. I can’t really see beyond a Merritt victory and if Warriner does tighten up a tad he could be worth laying at around [2.0]."

The US look set to continue their 400m dominance with a 1-2-3 a distinct possibility but who will grab gold, LaShawn Merritt or Jeremy Warriner? Bob Adams has a view...

In last year's Beijing Olympics the American team achieved a clean sweep of the 400m medals with LaShawn Merritt, Jeremy Warriner and David Neville grabbing the medals. It could be a case of 'as you were' in the World Championships in Berlin with the trio set to dominate the podium once again. Merritt and Williams share seven of the eight fastest times in the world this year, whilst Neville is a dangerous opponent and generally reserves his best for the big occasion.

Merritt won last year's Olympic final by an unheard of margin of 1.1 secs from Warriner, with Neville literally diving over the line a split-second in arrears. The Betfair head-to-head market between Merritt and Warriner is somewhat immature at present however, but I feel that the early-birds may have priced this up about right with Warriner a slightly generous [2.34] to obtain revenge over Merritt [1.56]. I can't really see beyond a Merritt victory and if Warriner does tighten up a tad he could be worth laying at around [2.0].

Neville may be the man with the toughest task as he tries to hold off a whole plethora of in-form athletes who will be vying for the bronze. These include Latoy Williams and Chris Brown from the Bahamas along with the best that Europe can offer in Irishman David Gillick, Belgian Jonathan Borlée and Frenchman Leslie Djhone. The head-to head between Brown [1.5] and Djhone [1.9] may be the most intriguing once further liquidity is in place and if the weather turns cooler then Djhone may represent a sound wager in temperatures he's used to operating in.

Given the number of athletes who are capable at this grade, the podium finish market may offer the best value for backers and layers alike and certainly Gil Roberts [4.0] and Renny Quow [6.0] look the best bets. However, Michael Johnson's 10-year-old world record mark of 43.18 is unlikely to go and the shape of that market bears witness to that.

Another record that most definitely won't fall in Berlin is Sergei Bubka's pole vault best of 6.14 which has now stood for over 15 years. Bubka improved the top mark 17 times between 1983 and 1994 and many of the vaulters in Berlin will be happy to equal his original world best of 5.85.

Two athletes who will certainly expect to go close to six metres and also to dominate the competition are the Australian Steve Hooker and his arch-rival Renaud Lavillenie of France. The head-to-head market between these two will be volatile throughout the competition and it's going to be a close call. The form horse is definitely Lavillenie [1.7] who leapt to a mark of 6.01 in Portugal in June, however Olympic gold medallist Hooker [1.93] is second only to Bubka in the all time vaulters list and if he can get anywhere near his best of 6.06, he should make it quite a competition.

If Hooker and Lavellenie are shoo-ins for the gold and silver then the podium finish market is of interest in trying to figure out the bronze medallist. Veteran Romain Mesnil [3.0] is no back number whilst Germany's Alexander Straub [4.0] will also be fancied in some quarters. However, Britain's Steve Lewis is one of the most rapidly improving athletes in this discipline in the world and at a tasty [10.0] in the as yet undeveloped market he represents a stand out backing proposition.